There’s a whole lot going on in the Residential Infill Project (RIP).  In my last post, I wrote about how the RIP effectively rezoned Eastmoreland from a single-family residential neighborhood into a multi-family residential neighborhood.  But RIP is a big deal not just for what it says, but also for what it doesn’t say.  Nowhere in RIP is any mention about how all this increased density will be supported by existing services and infrastructure.

Here in Eastmoreland, our local public school, Duniway Elementary School is at its largest enrollment since it became a K-5 school — it originally served as K-8.  When I met with principal Matt Goldstein on February 16, Duniway’s K-5 student enrollment was 526.  This even exceeded the forecast of 508 students for the 2016-17 school year.  There is little surprising about this as enrollment forecasts have consistently underestimated actual enrollments for years as shown in the following chart.[These projections are performed by the PSU Population Research Center (PRC) every couple years and you can find their full reports here.]  Note that Duniway’s student enrollment jumped significantly between the 2013-14 and 2014-15 school years as a result of a boundary change designed to even out enrollments between Duniway and Llewellyn. 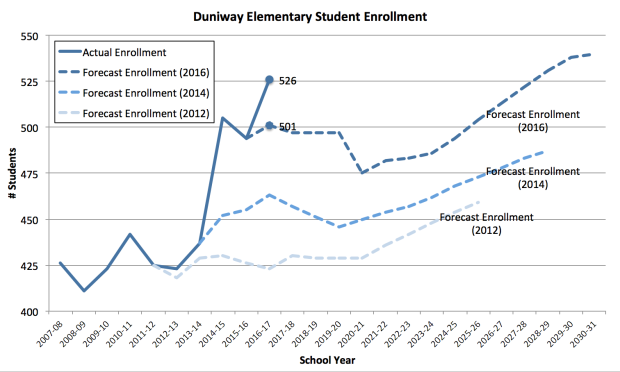 What’s interesting about our area and the surrounding Portland Public Schools (PPS) is the geography that constrains the boundaries.  To the west is the Willamette River providing a natural boundary, and to the south is Clackamas County which has its own school district.  The entire population of this area of Portland has four local PPS elementary schools:  Duniway, Grout, Lewis, and Llewellyn.[There are a relatively small number of families that send their children to other PPS schools or private schools such as Holy Family.]  Here, too, we see a similar trend of enrollment projections.  A family in Eastmoreland wanting to send their children to their local elementary school (Duniway, in our case) is likely to find this more and more difficult.  Over the past 9 years, PPS enrollment as a whole has grown only 7%, but Duniway, Lewis and Llewellyn combined have increased 34%.

Much of the growth is coming from people moving to Portland from other parts of the country which is increasing Portland’s overall population. Duniway enrollment is at a level not forecast for another 10 years from now. The growth is coming much more quickly than expected.  Elsewhere in Portland, some schools are under-enrolled. This only further highlights how misguided RIP is for Portland. Blindly promoting density everywhere is a bad solution given that some areas are better able to accommodate this population and school enrollment growth than others.

According to Principal Goldstein, the optimal configuration for Duniway today would support about 500 students in 18 classrooms.  For the 2016-17 school year, we have 526 students in 20 classrooms.  Duniway also has one pre-K class, a music room, an art room, a computer lab, and a library.  A PPS report from the 2015-16 school year indicates the PPS K-5 average class size was just under 24 students.[PPS Class Size Summary 2015-16]  At the time, Duniway’s average was 26 students. For the 2017-18 school year, it is likely to increase to over 26.5 students.  We already have 6 classes with 30 or more children in them at Duniway. Oregon ranks 49th nationally in average elementary school class size and has no cap on the maximum number of students in a class.  All parents know that class size matters and Portland’s situation will only get worse under RIP.  Despite the fact that Duniway’s test scores are much higher than the statewide average, academic performance has been falling — likely a direct result of the growing class sizes.

Everything costs money, and Portland Public Schools does not have money to spend.  Statewide there is a problem, with an expected $1.8 billion budget deficit for education..  Through the PTA and the Duniway Foundation, the Duniway community already raises substantial funds in order to provide library services, physical education, educational assistants, art, science, music and PE equipment, technology, and other things.  At the rate we’re going, the outlook does not look promising that our children will get the best possible education at their local elementary school.

The latest news (as of February 17, 2017) from Principal Goldstein is that Duniway will have to make staff cuts in 2018. “As a result of reduced funding from Salem, districts across the state are faced with having to make cuts.  Simply put, the amount allocated to PPS does not meet the rising costs of running our schools.  Almost every school (and many central office departments as well) are facing cuts.”  These cuts will mostly affect support staff, putting a greater burden on teachers themselves.He anticipates an increase from 20 classrooms to 21. The combination of a growing number of students and a growing number of classrooms compounds the problem at Duniway. One additional teacher and less support staff means teachers will be expected to do more with much less.

All of these issues have been evolving in the absence of the RIP. Imagine how additional density will exacerbate the challenges we see today. The enrollment projections, which have systematically under-estimated student enrollment, most certainly do not directly consider the impacts of RIP, which is designed to allow multiple units where today only one is allowed.  RIP does not consider the impact on our schools  We know that different schools each face different challenges. At Duniway, our main challenge is overcrowding.

RIP is not sensitive to the challenges faced by each school and broadly assumes that every community and school will just figure out how to accommodate greater density. From my discussion with Matt Goldstein, it became clear that Portland Public Schools has not been an active stakeholder in RIP or even Portland’s 2035 Comprehensive Plan.  The 2012 Portland Plan seemed to be taking a step in the right direction by laying out some key objectives for our schools.  In one of the background reports used to create the Portland Plan, it was noted that “In addition to regulatory limitations, population changes threaten the vitality of many public schools, either through the possibility of closure resulting from declining enrollments or a lack of resources and capacity caused by rapid enrollment increases. To help districts best serve current and future populations, the City should work collaboratively with school districts to help the districts coordinate their long range facilities plans with the Comprehensive Plan in order to ensure that the districts have the facilities and land they need.“[Portland Plan, Background Report on Public Schools.] But with RIP, this hasn’t happened.

There is little thought about how schools deal with growth beyond the projection planning PPS has been trying to do on their own for years.

In addition to preserving the history of Eastmoreland, a historic district could help ensure that Duniway remains an option for all Eastmoreland elementary school age children.  Without that, we will simply rely on our local government which has not shown itself to be adept at balancing the many competing needs throughout the city of Portland. We all bear the consequences, including those who don’t send their children to Duniway or even have children. School quality is a major factor affecting property values, neighborhood desirability and livability.

Duniway plays an important role in Eastmoreland, creating both a learning environment as well as hub where relationships are formed and experiences are shared. We all have a responsibility to protect it and steward it forward. We must pursue multiple avenues to do this, including creating a historic district in Eastmoreland.