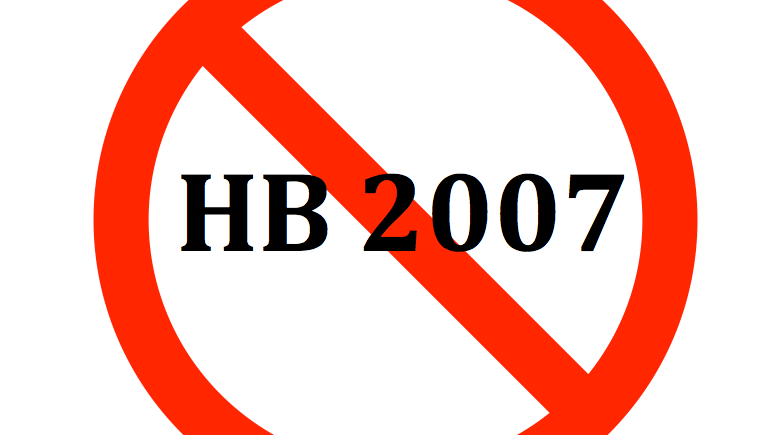 read “An attack on Oregon’s most historic buildings and places”

​The bill is pending in the Ways & Means Committee. There will likely be a vote in June or July. Please send emails right now to your senator and representative, the majority leaders, and the Ways & Means committee to oppose HB2007.

​1. COPY this suggested text – OR put something in your own words.

I am asking you to remove all language related to historic districts from HB2007.

HB2007 attacks our history and heritage. Neighborhoods listed in the National Register of Historic Places represent a fraction of 1% of the housing units in Oregon, and even if every historic house in Oregon is demolished, it won’t make any difference to our supply of affordable housing. These are the most historic neighborhoods in our state and Oregon Goal 5 mandates their protection. Historic districts already allow accessory dwelling units and internally converting houses to duplexes.  HB2007 should support density without demolition.    ​

HB2007 is a “one size fits all” attempt to usurp local control. HB2007 will forcibly re-zone every single-family house neighborhood in Oregon to multi-family (duplexes and accessory dwelling units).  HB2007 will also deny every city, except Portland in downtown & Gateway, the option of discretionary review of housing projects.  These issues should be decided by local cities, elected officials and voters, not imposed from the state.

HB2007 makes sweeping changes without public input. HB2007 overrides zoning and comprehensive plans THROUGHOUT OUR STATE with no opportunity for public input.  The House Human Services and Housing Committee took testimony only from developers, homebuilders, real estate investors and their partners before passing the bill to Way & Means.  The house committee has since rejected all emailed public testimony. The Oregon League of Women Voters criticizes the “lack of public process” on HB2007.

HB2007 is not a serious effort to solve the affordable housing problem. All the bill does is help developers make more money building expensive housing. We want our legislature to deliver real solutions, not handouts to developers at the expense of neighborhoods.

2. CLICK on the link below to open an email message.

​​The email will be addressed to the legislators on the Joint Ways & Means Committee, and to Eastmoreland’s state senator and representative, and bcc’d to HEART (ihearteastmoreland@gmail.com).  You can add or delete addresses. CLICK HERE TO START EMAIL.

3.  PASTE the copied text into the email and personalize it.

Tell your own story, use your own words, say why you want them to protect historic neighborhoods.  Be sure to include your name, address and neighborhood.​

If you don’t live in Eastmoreland, please use the links above to email Ways & Means, and then also email your senator and representative.  Click here to find them.

​“Our state association, OHBA, is working closely with Speaker Kotek’s office and 1000 Friends of Oregon on a bill that would alleviate many of the barriers to development”

Other backers are Oregon LOCUS (“brings together real estate developers and investors from across the country to change policy at the local, state, and federal level”) and the Oregon Realtors’ Association.

But the bill doesn’t do help affordable housing at all.  HB2007 started as a laudable effort to require faster processing of permits for affordable housing projects.  It has expanded into a sweeping and stealthy attempt to encourage demolitions, prevent cities from requiring livable and well-designed development, and to eliminate historic preservation.

HB2007 is a stealth bill.  It got all the way through committee and to Ways & Means, before anyone but its backers knew about it or were invited to give testimony to the legislature. The League of Women Voters says there has been “a lack of public process” and opposes HB2007.

“The developers did not get what they wanted—or at least not fast enough—with the becoming-infamous Residential Infill Project, so they took their issues to Salem.” United Neighborhoods For Reform​

“Ostensibly about easing construction of affordable housing, Oregon HB 2007 is instead both a disservice to affordable housing and a specific harm to historic districts. The bill takes a “one size fits all” approach that overrides local controls over issues like design review and zoning and potentially encourages the demolition of smaller, less expensive homes. In other words, the bill is the proverbial wolf in sheep’s clothing.” Architectural Heritage Center

“Oregon House Bill (HB) 2007 which is being rushed through the legislature, would virtually negate Historic District demolition protection, would allow developers to build multifamily housing in single-family zoned neighborhoods, and would take away a lot of local development regulation control from Oregon towns and cities” McCulloch Foundation

“there are plenty of ways to increase density and affordability in cities that don’t involve destroying the historic fabric of our communities . . . All over America, preservation projects are expanding housing options, helping cities becoming more affordable, and demonstrating that history, sustainability, fairness, and economic vitality can go hand-in-hand.”  National Trust For Historic Preservation

“The League has concerns around the lack of public process. We understand additional amendments are being considered, but we are not sure that they will move the League to a “support” position.”  Oregon League Of Women Voters

1.   Require every Oregon city and county to permit the construction of duplexes and accessory dwelling units (ADUs) in every single family residential neighborhood.  In other words, force on all of Oregon the “Residential Infill Project” (RIP). None of these units would have to be affordable.

2.   Prohibit cities from reviewing the design appearance of any housing project outside of Portland’s central city plan zone and Gateway.  This will take away an essential tool of urban planning for livable cities, from every city and county in Oregon.  In Portland, it will prevent design review of development along commercial and transit corridors like NE Glisan, SE Belmont, NE Sandy, E Burnside, etc.   Developers will be able to quickly throw up ugly, unlivable boxes that will blight our city for generations.  None of those projects will have to be affordable.

3.  Prohibit the protection of National Register Historic Districts in residential neighborhoods.    This bill will allow demolition of historic and landmark houses in our city’s most historic neighborhoods.  None of the new construction would have to be affordable.

You can follow the bill here.  Expand the “catchline summary”.

The following is based on the current version of HB2007.  If the bill is amended, we will update this section.​

HB2007: “(a) Discouraging needed housing through . . . (B) Designation of a primarily residential neighborhood as a national historic district;”

Portland’s “Residential Infill Project”, commonly known as RIP, will permit the construction of duplexes, triplexes, and clusters of apartment/condo “cottages” in a “Housing Opportunity Overlay Zone” covering approximately 70% of Portland neighborhoods currently zoned for single-family house residential use.  The city is in the process of developing enabling code for RIP.

HB2007 seeks to force a blanket RIP on every city and county and every neighborhood in Oregon.   There is no consideration of local needs, no respect for local planning and self-determination.  Whether high-density redevelopment is locally desired or appropriate in a neighborhood of Ashland, Beaverton, Astoria, Bend, Eugene, or any other Oregon city will make no difference – it will be forcibly mandated by this bill.

There is no requirement that the housing that cities and counties will be forced to permit shall be “affordable”.  Developers will have the absolute right, regardless of local zoning, to demolish a $300,000 family home to build multiple $800,000 luxury townhouses.  This is happening all over Portland, and under HB2007 it will happen all over Oregon – by state fiat, disregarding principles of local self-determination.

HB2007 will prohibit discretionary design review of all housing development – whether affordable or not.  Cities will only be able to apply so-called “clear and objective” standards which are, essentially, just simplistic height and size limits:​

HB2007: “Except as provided in subsection (6) of this section, a local government may adopt and apply only clear and objective standards, conditions and procedures regulating the development of housing”

The bill provides only two very limited exceptions.  The first is in Portland’s downtown and Gateway, and the other is a handful of existing “local” historic districts.  Everywhere else in Portland, and everywhere in all other Portland cities, developers will be immune from discretionary design review.  Here come the shoeboxes!